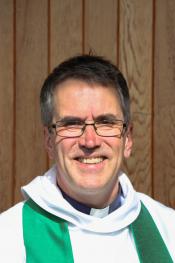 Eric  was installed as vicar of St John’s Roslyn in August 2011.  Born in Carlisle in the north of England,  he taught High School physics, electronics and other science in inner-city Leeds, before training for the priesthood at Trinity College, Bristol in the 1990s.

He came to New Zealand after ten years as vicar in the rural parishes of Gisburn and Hellifield on the Yorkshire/Lancashire border.

Eric is married to Sarah, and they have five children.  Rose and Hannah both live in the UK.  Ella, Megan and Sam have come to live in New Zealand.

Eric says 'the Christian Life is a Participation in the Life of God – summed up in the words of the former Catholic Archbishop of Paris, Emmanuel Suhard: “To be a witness does not consist in engaging in propaganda, nor even in stirring people up, but in being a living mystery.  It means to live in such a way that one’s life would not make sense if God did not exist.” '

He loves being with people, sharing in faith and life, walking, photography, rare steak and a decent pint of beer. 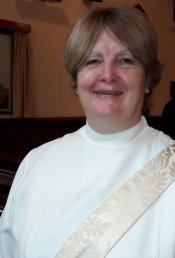 Pauline was born in Newcastle-Upon-Tyne, and brought up in North East England until the age of fourteen. She completed high school in Sussex, and began training as a nurse in Hastings in 1973. In 1980 she emigrated to New Zealand, and lived on the Kapiti Coast for a year before moving to Dunedin.

A great part of Pauline’s life here in NZ has been raising four children, and she returned to nursing in 1993, obtaining a Bachelor of Nursing degree in 1995. Since then, she has worked at Mercy Private Hospital.

In 1986 Pauline began attending St Paul’s Cathedral, when her eldest son joined the choir, and participated in many ministries there, including, sides-person, liturgist, reader, intercessor, as well as serving on vestry, diocesan council, and as a synod representative.

In 2003, she introduced a new ministry to St Paul’s, that of parish nursing, and served in this role until 2007, when Pauline was ordained Deacon.

Pauline has been at St John's for a few years now, and says she’s still discerning God’s call as to the way forward in this journey and for what purpose she is here. She says she feels privileged to be amongst us, and would love to hear our stories over a cup of tea, and offer pastoral care and home communion as well as explore new forms of liturgy including healing ministry.

Pauline says: “We live in a time of challenge, in a society that is becoming more secular, and where work and daily busyness consume so much of our time, and the opportunity for quietness and prayer is often overlooked. I look forward to working alongside you in our faith community and reaching out to all those in need.” 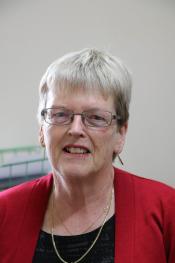 Margaret McLanachan is married to Craig and has four adult sons.  She is a life-long Anglican, having been raised in St Mary’s Parish, Mornington, and she has been a member of St John’s since 1989.  She has been Parish Administrator since 2001, and she works in our office from 9:30 a.m. until 12:30 p.m. Monday to Friday.